I am so desperate for it to be Spring, I can't even stand it. This long winters are difficult for this Southern girl, so I'm trying to coax Spring weather into our lives by decorating the house with flowers, opening up all the blinds, and trekking all over town with the stroller, soaking up the 50 degree sunshine. But Rosalie has been helping to brighten up these March days by donning a huge splash of color. Come on, Spring! We're ready! 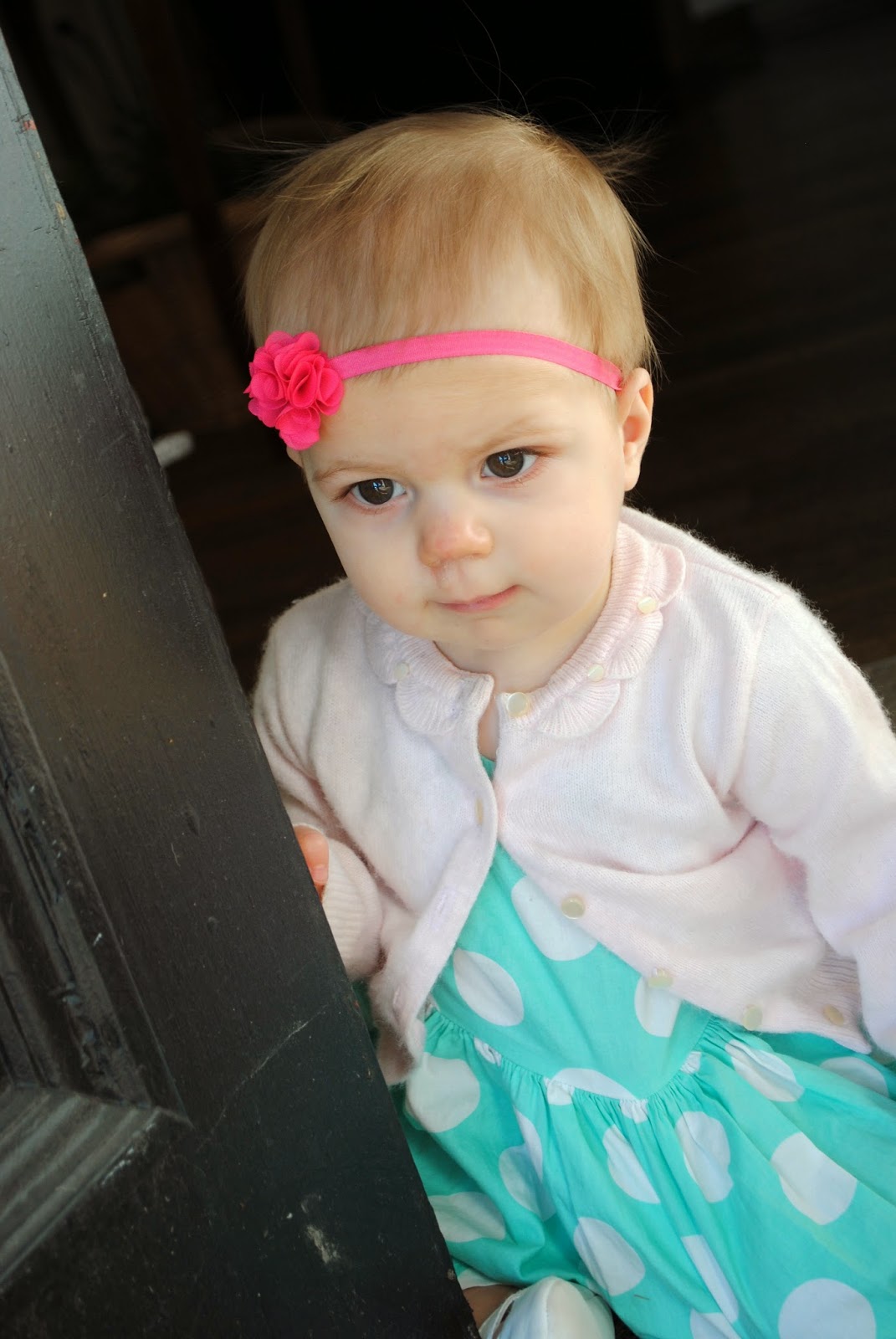 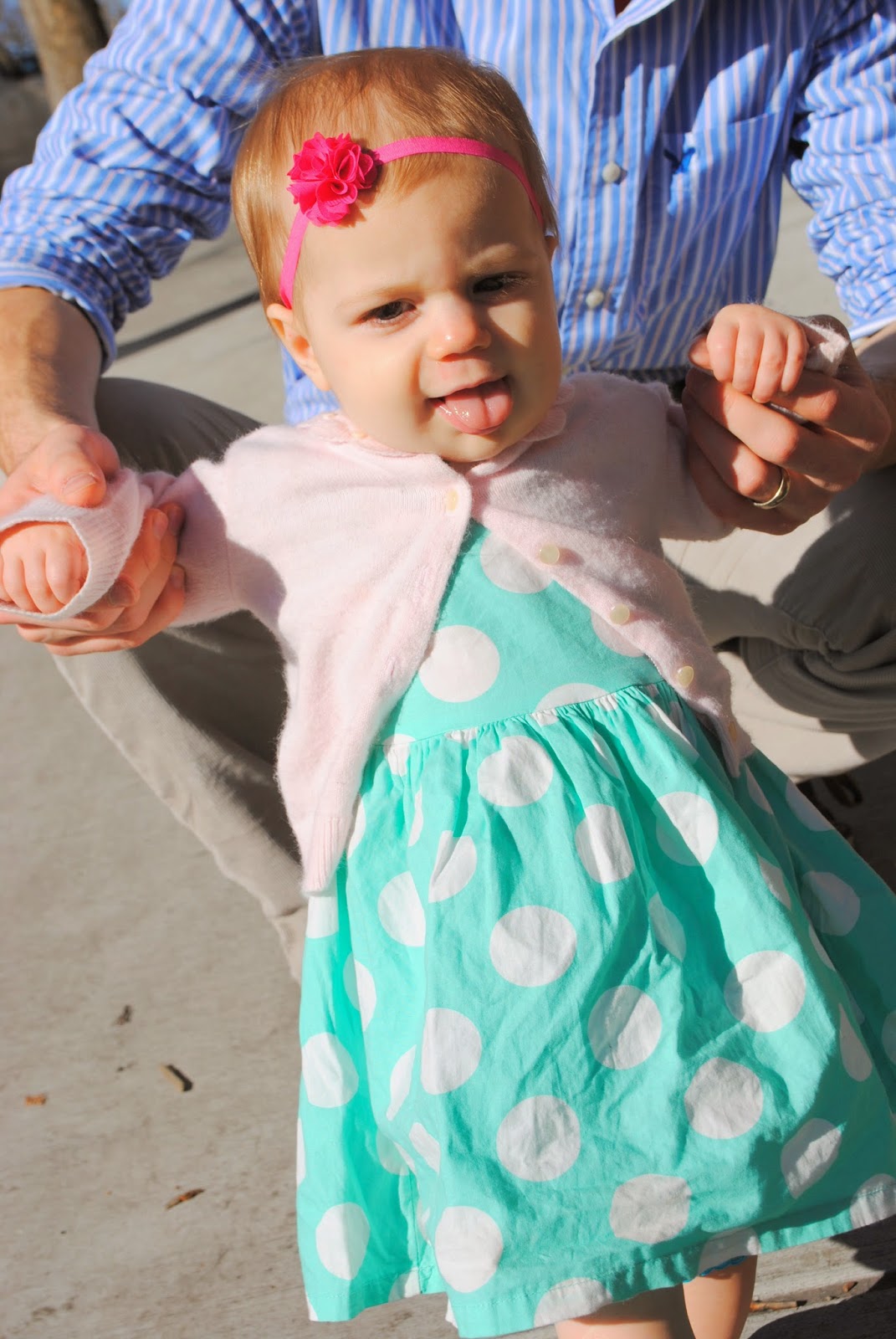 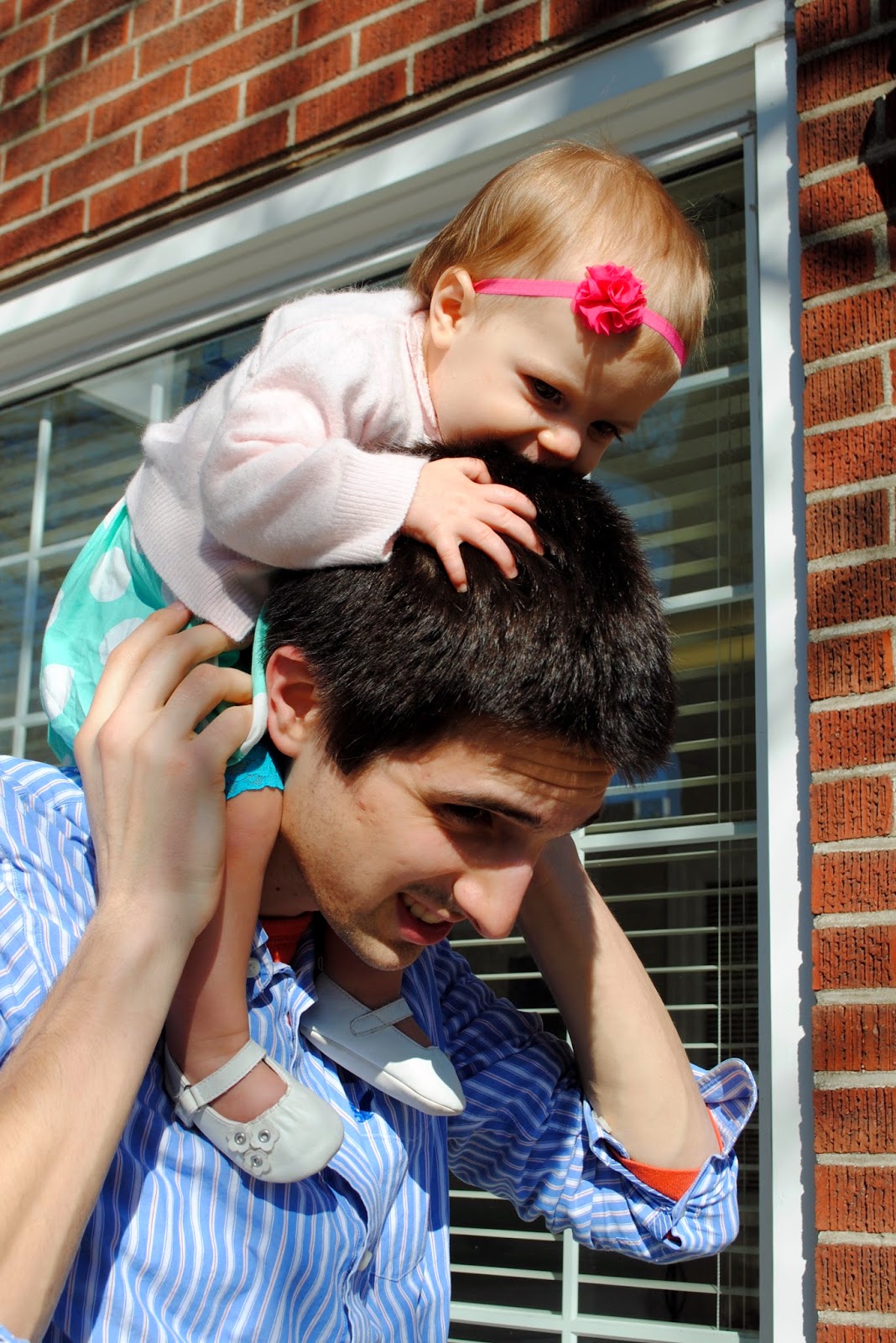 Posted by Julie Snider at 2:57 PM No comments:

I was in Seattle last week visiting family and missed out on blogging, so there will be two pictures in this post because I am a week behind. :)

Rosalie and I took a spontaneous trip to Seattle last week to visit some of Nathan's family, and although the trip (both directions) was more difficult than we had anticipated, we still had a blast while we were there! Rosalie and I bused up from Moscow (Nathan drove up to meet us later) on Thursday morning, and encountered a number of snags along the way, getting us to Seattle a bit behind schedule. Rosalie was amazing! She had a fever during the bus ride, but was still cheerful and sweet almost the entire time despite her discomfort. Kinda crazy how a child this small can still be an example to her mom, but our little Bug sure is. I am definitely a cranky sickie, and she's my inspiration ;) I was going through a difficult time a few weeks back when Rosalie was being extremely clingy whenever I was in the room. As long as I was in a different room, she was fine. I could even be in the same room cleaning or cooking. But if I wanted to work on anything quietly, like knitting or reading, or if I needed to go to the basement (where I couldn't keep an eye on her) to do laundry, etc, she would want to be held. My mom mentioned using the pack-n-play for the "play" it was intended for, rather than just for sleeping. I dubiously tried her suggestion, expecting Rosalie to think it was nap time and start crying. But instead, she adored it! Now, she begs to be put in her playpen, and will spend hours squealing and whacking things together. I'm more productive and she's learning how to entertain herself. It makes me so happy. I love her. 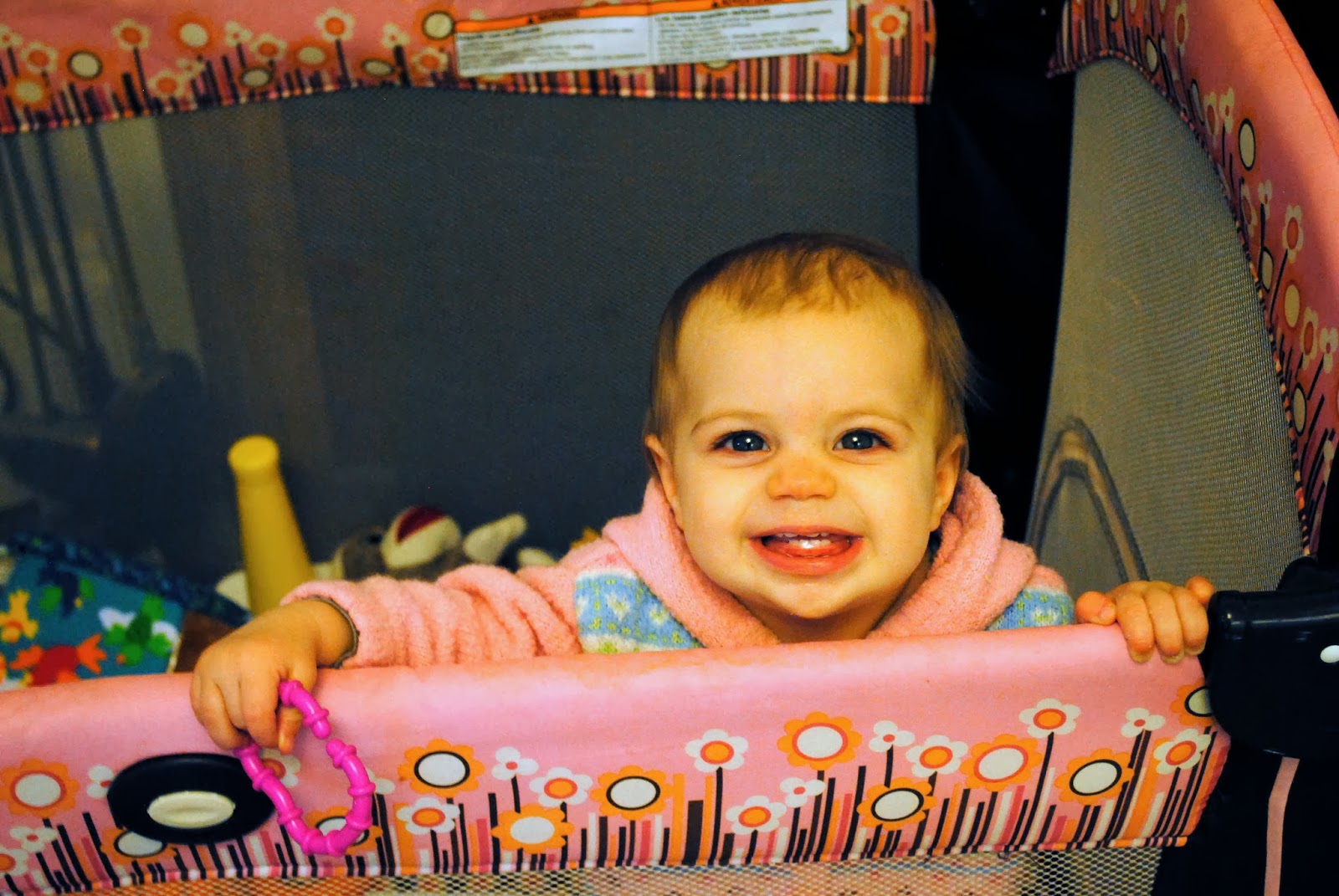 Posted by Julie Snider at 7:08 PM No comments:

Three mornings a week, this little girl's daddy keeps her while I go to a class at the gym. It is the highlight of her day. She just adores Nathan, and watching them together is one of my favorite things to do. 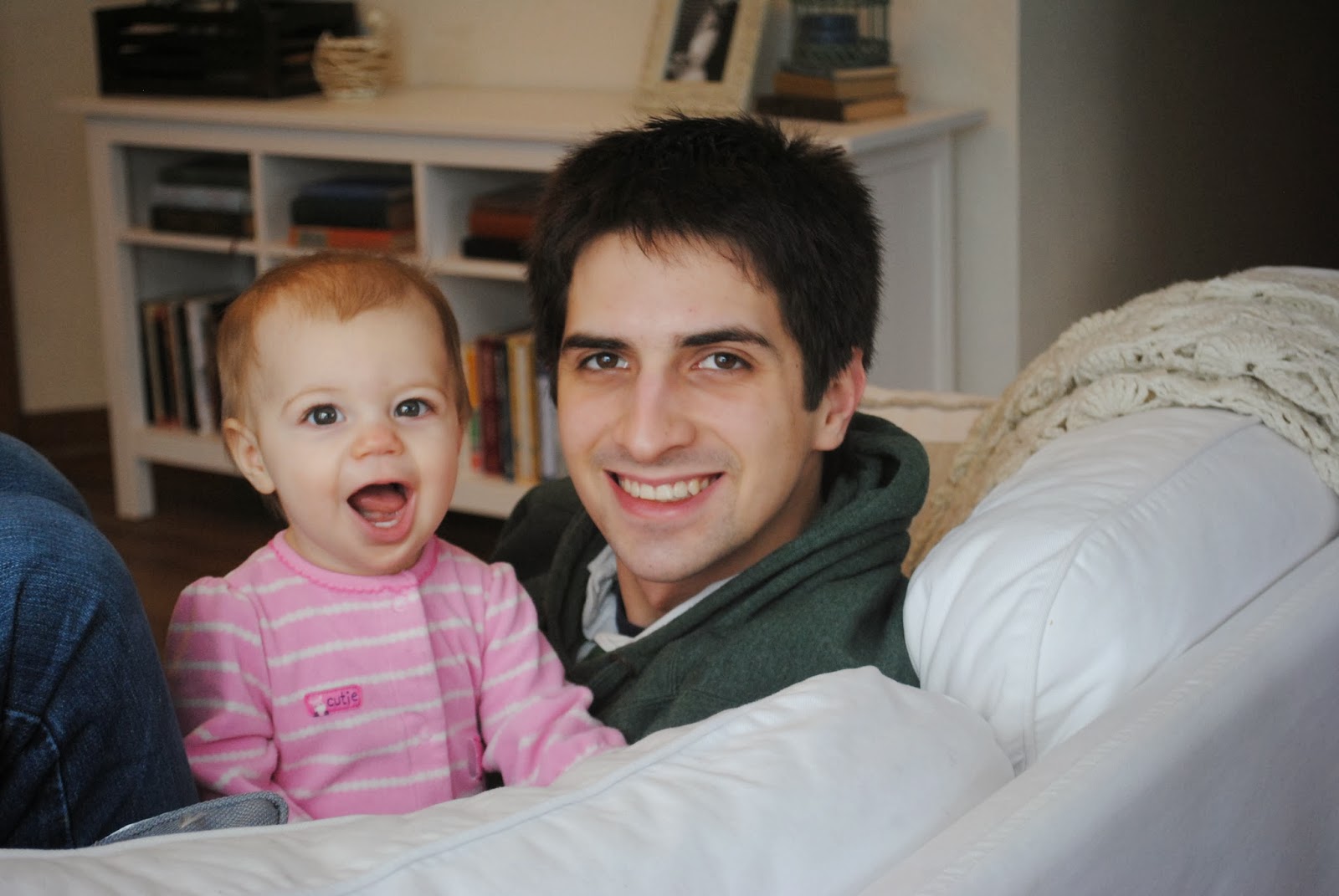 Posted by Julie Snider at 10:44 AM No comments:

I cannot get over how much Rosalie loves bath time. It has been one of her favorite things since the first few days of her life, and absolutely nothing can phase her. Every time she hears the shower or bath come on, she stops whatever she is doing, starts squealing, and crawls full speed towards the bathroom, shaking with excitement, and trying to dive headfirst over the side of the tub into the water.

This girl adores the bath so much that even when she gets water up her nose and in her eyes as she catapults underneath the surface, she just shivers and shakes her head like a dog when we grab her, trying desperately to dive under again. This makes washing her hair very easy because she could care less how much soap and water get into her eyes, but it also makes for a crazy and hilarious few minutes as Nathan and I try to hold on to her slippery limbs and keep her from swimming under water. I have no doubt that the soaked floor, wet clothes, and endless laughter that is bath time will become one of my favorite memories of our little Rosie girl. Posted by Julie Snider at 9:58 AM No comments:

We've seen a bit of snow this winter, but not nearly as much as we expected. I remember a couple of winters a few years back where the ground was covered with some amount of snow from November-March. Not this year! It's been much more mild (for which I've been very grateful!). But this morning, we were finally able to use Rosalie's snowsuit and let her play in the snow. I was thrilled; Rosalie was less than enthused -- too much wet and cold in her face! But with her sunny disposition, I was still able to capture a few smiles! We love her! 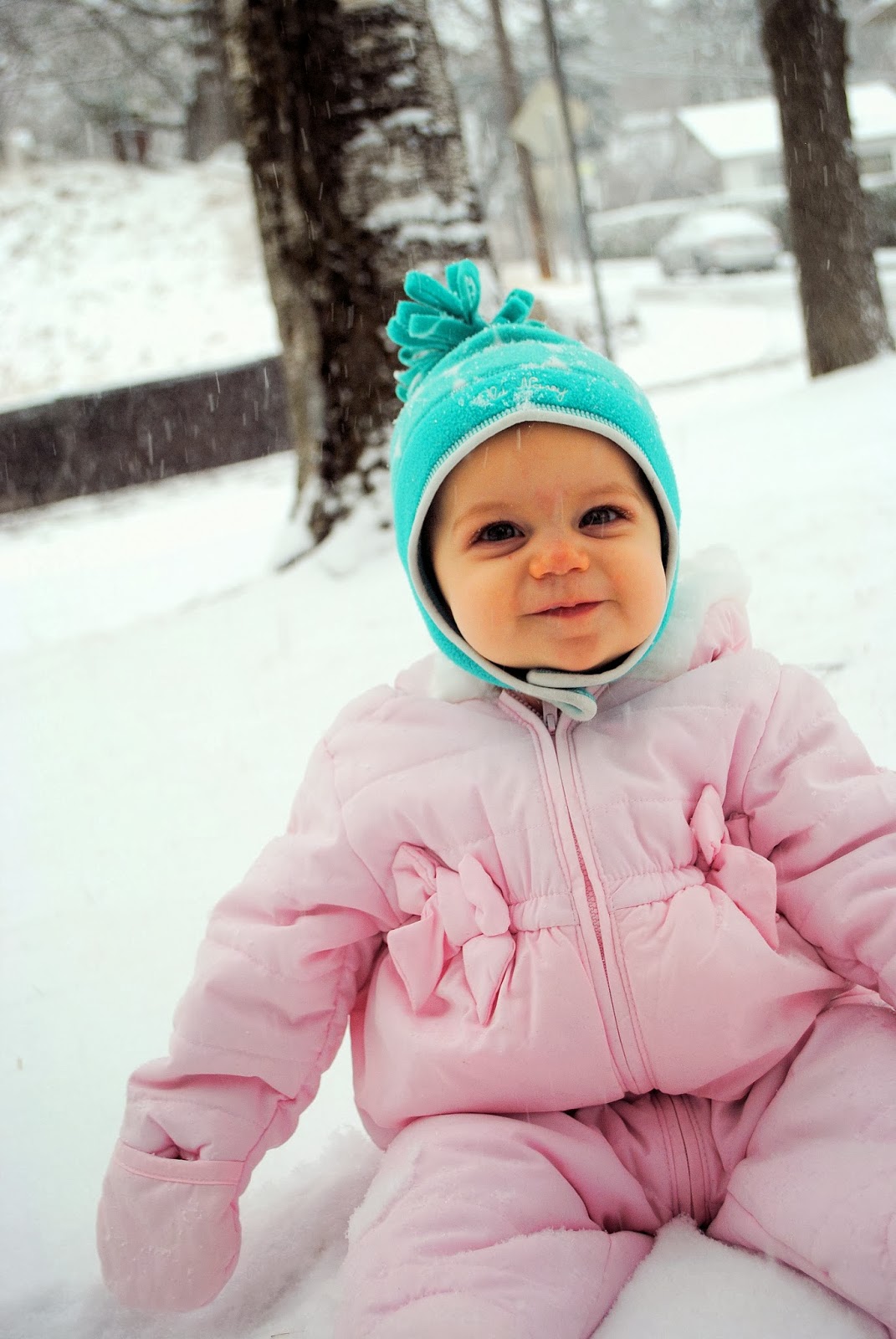 Posted by Julie Snider at 10:23 AM No comments:

Rosalie is 9 months old today. Crazy! Somehow, hitting the three-quarters mark makes her 1st birthday seem just around the corner. Her personality is really coming through now, and this past week, I introduced her to yogurt. She is just crazy about it. Normally, I have to encourage her to eat, but not when it's yogurt on the morning menu! 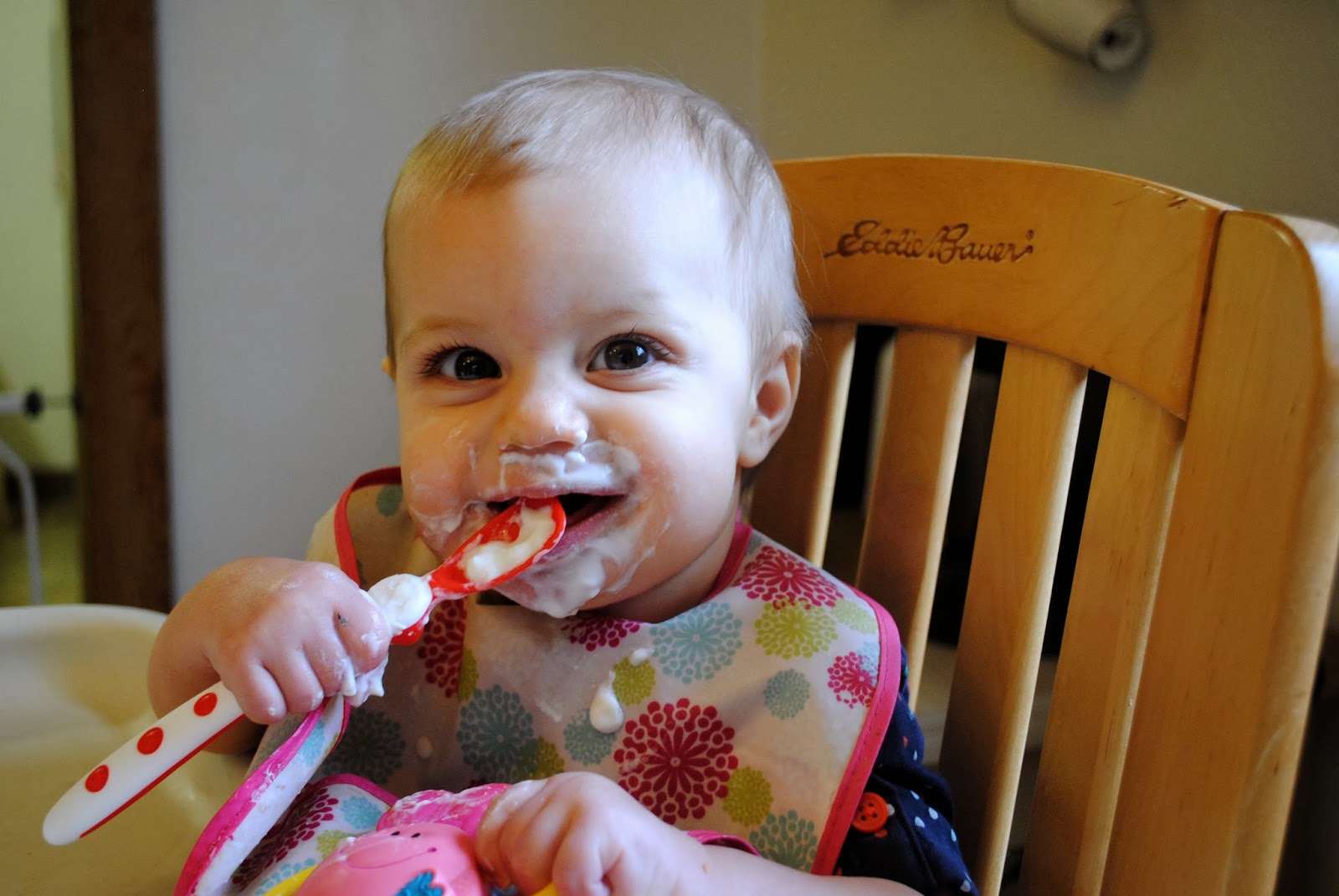 Posted by Julie Snider at 2:01 PM No comments:

Our pediatrician recommended starting Rosalie on a bottle as early as possible to prevent her refusing to take one if it became essential at any point. So when she was 2.5 weeks old, we bought a bottle and were thrilled as she happily gulped it down.

During the first few months of her life, we left Rosie with her grandparents a few times when we would go out for the evening, and I always left a bit of milk to make sure she was happy all evening. But when she was about 4 months old, Rosalie started going to bed around 7 pm every night, and I stopped giving her a bottle. If necessary, I could feed her around 6:30, and she'd be set for the night. It never occurred to me to keep giving her a bottle periodically if it wasn't necessary.

About a month ago, I decided to leave Rosalie with my mom for the afternoon, and pulled out the bottle to make sure she would take it while I was gone. No such luck. She gnawed on it, crying when I took it away, but she made no progress with the milk itself. So I went on a wild goose chase, buying every type of bottle and sippy cup I could find on the Palouse, but she refused them all. I gave up on the day trip, but not on the bottle. I knew Rosalie would need to take one eventually...

Finally, on Monday, I found the magic cure -- the Soothie bottle. Rosalie has only taken Soothie pacifiers since birth, and when I heard that there was a bottle by the same company and shaped just like the paci, I thought I might have hit the jackpot.

Turns out I did, and now our little Rosalie has a new best friend. Posted by Julie Snider at 11:09 AM No comments: